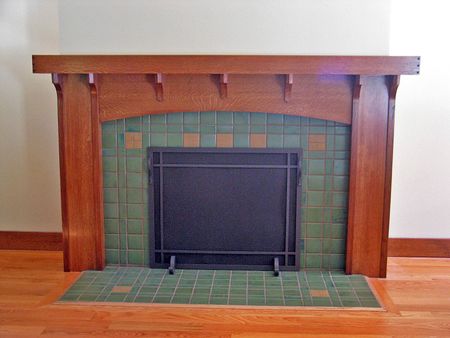 The surround above was built by a reader who designed it entirely in Google's free Sketchup application and then built the piece from quarter-sawn white oak (finished with a Minwax "English Chestnut" stain and wipe-on polyeurethane), using only hand tools. The tile is from Minneapolis' Claysquared. Take a look at his other Craftsman designs here; they include light fixtures, furniture and more. 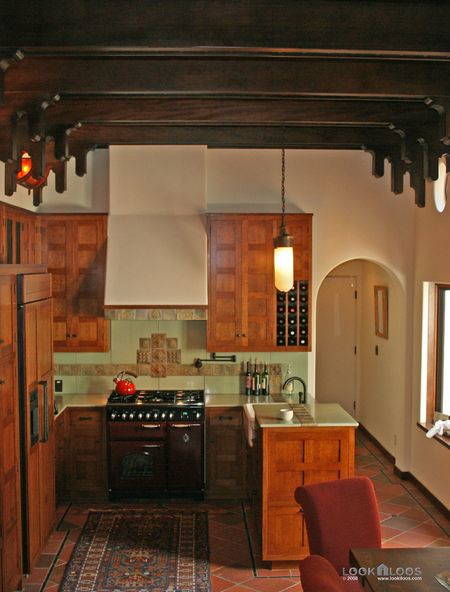 Lookiloos has a terrific profile on Michael Borbely's gorgeous Mission Revival home in San Jose, California. The tile, beams, fixtures - everything is spot-on and a really nice example of the style.

The stark white house at the end of Plaza Drive in San Jose's historic Palm Haven neighborhood takes you by surprise. It's small in scale, a single story on a corner lot. But its domed tower and decorative parapet across the roofline force you to take a second look.

This is Michael Borbely's mini masterpiece - a recently completed Mission Revival house of stucco and tile that took years of research to create, plus help from San Jose's Fireclay Tile to reproduce century-old details.

Borbely, 45, is an architectural activist of sorts who spearheaded an effort several years ago to restore the pillars at the entrance to the 1930s Palm Haven in Willow Glen to their original Mission Revival style. So when he was ready for a new project after selling his Prairie style house in the neighborhood, "I looked for the house in the worst condition that had the most impact on the neighborhood." He decided on a tiny Spanish style house for sale nearby in need of a major remodel. He wanted the house to fit into the streetscape and, taking some cues from the pillars and an original Mission Revival house in the neighborhood, decided to reinvent a scaled-down version. Ratcheting screwdrivers aren't all that new, but this is by far the best one I've found. It's better made and less expensive than a lot of others out there, and - at my house at least - replaces a whole bunch of other screwdrivers in my toolbox. Its advantages over the Snap-On and Sears models are innumerable, but principally, the knob on the shaft that allows the bit to turn four times for every handle turn - it's as fast as a drill driver in this respect, and is a huge time saver for long screws. It also has far better bit storage is easier and faster and much more secure than the clips on the Sears model. $17 from Bubba Deals, probably as good a price at your local independent hardware store.