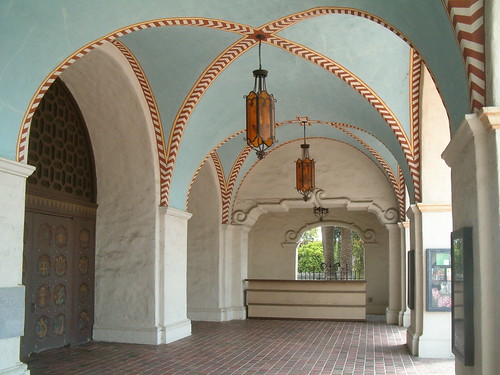 how to remodel a kitchen in 905 days 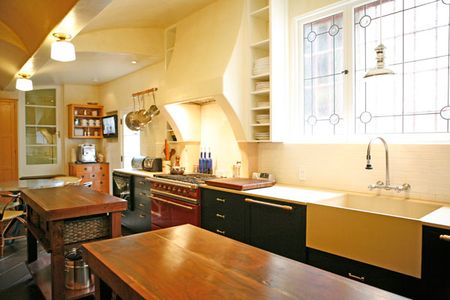 About 2 1/2 years ago we started on a kitchen remodel project. If you have never done a massive kitchen remodel to an 83 year old house on hill, in a historic neighborhood, then you may doubt that it is a process that could take more than two years. 2 1/2 ago I would have doubted it too.

To be fair, the kitchen has been "done" for about 7 months. In fact I started this blog right about the time the kitchen was "done".

But now the kitchen is done "done". The last painful details (including a crack in a custom built sink) were finally completed about 3 weeks ago. So I have decided to document this kitchen. And where do I document everything in my life? Well here of course!

I won't go into all the gory details. But basically we knocked out walls and turned a kitchen, a laundry room and my old office into a large kitchen and eating area. We moved the laundry room to what was formerly a spooky little space under the garage. We blasted through the foundation of the house to make a door that attaches the new laundry room to the kitchen.

The finished product is a beautiful, warm room. Alternatively modern, Victorian and Prairie, it uses light and wood and tile in concert better than any other remodel I've seen in the last few years.

Congratulations to greg and his hard-working architects, Victoria Yust & Ian McIlvain of Tierra Sol y Mar, and the craftspeople who did the actual building of the room. 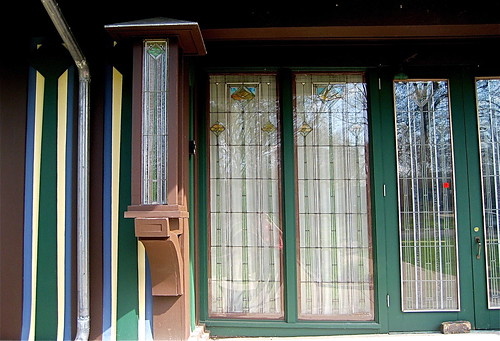 As anal-retentive as I am about type, you'd think I'd iron out all the bugs before dropping the new template into place. This time, however, I've decided to be a bit more experiential. I still can't get the ads to work right (saving typelists and the custom html widget seem to time out upon trying to save the google ads code, but nothing else causes this odd behavior); I need to tighten up the 2-line headers, although I'll try to keep those to a single line in the future (any idea on the best way to do this via css?).

I'm open to additional suggestions for improvements - please do let me know what I should change, but remember that my level of technical expertise is not especially high, and I do need to lean on more-experienced friends for much of the implementation.

Here's a contemporary melding of Ranch, Mid-Century and Craftsman styles, with some very modern-looking stonework, near San Luis Obispo, CA. Check out the wonderful Greene-inspired door.

in for sale, furniture | Permalink | Comments (0) 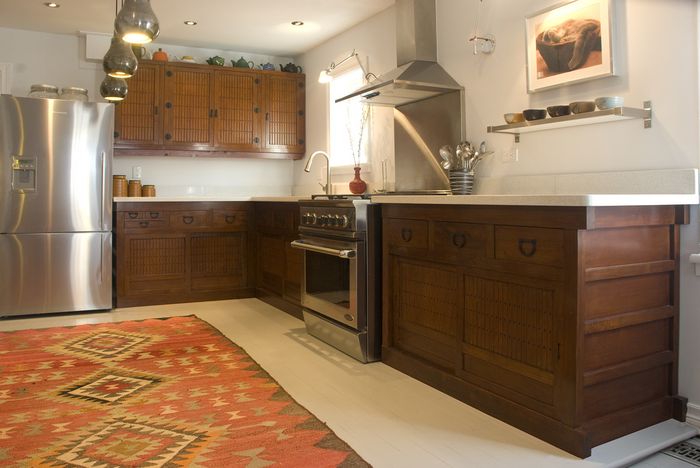 [the finished kitchen; photo by Kim]

Last week, in our post on Greentea Design, I made a quick mention of one specific old-house kitchen remodel using their cabinets. Since then, Mike Ramsey at Greentea was kind enough to supply me with comprehensive background information on this particular project, and I thought it would be of interest to all of you - not just those considering a kitchen remodel, but anyone interested in how this Asian-influenced cabinetry can work in a Craftsman home.

The kitchen in Kim's turn-of-the-century Ottawa bungalow was originally attractive, I'm sure, but long before she moved in there, someone with a surfeit of love for Formica ripped out the original cabinetry and, unfortunately, expressed themselves all over the room. Fast forward to the both modern and at the same time classic finished product - but don't worry, we'll spell out the whole process for you below; you can read even more about it on Kim's own blog.

Kim had already decided to remove the non-bearing wall that separated the kitchen from the living room, which made the previous owner's kitchen cramped and difficult to use. In doing the demolition, she found all sorts of interesting things - layers upon layers of wallpaper and newsprint dating back to 1903. Other demo-related discoveries included what appeared to be horse hair - possibly used for insulation in the ceiling - found when removing wood paneling to allow for can lights,

Next, Greentea interviewed Kim regarding what she wanted and what she needed from the new kitchen, and produced a rough sketch of what would be possible in the new room. Kim picked out which pieces she wanted, and Greentea rendered them in Google Sketchup for confirmation of sizing before they submitted the order to their factory. Pieces included 2 single and one double Mizuya upper cabinets, three Mizuya base cabinets – two 3 drawer versions and a smaller one with chopstick drawers in place of the third drawer – and finally a standard 4 foot Mizuya Pantry. Google Sketchup, the (free) savior to the design/build industries and with a learning curve that allows anyone to pick it up, is again called into use, this time to generate a full render of the finished kitchen.

Soon after the demolition and basic structural changes were completed, Kim received the (very well-packed) cabinetry from Greentea and began to put things into place. Appliances were brought in, base cabinets were installed, and whatever minimal modifications that were needed for plumbing were made, then sink, lighting, and countertops came next; at this point, it was really starting to look like the kitchen she'd been waiting for - certainly a feeling we've all been very happy to have as a remodel starts to actually resemble the picture we have in our heads. One neat addition at this point: Kim had a cat hole made in the hatch to her basement, which was mounted on shock absorbers to let it move up and down smoothly - a really nice feature worth emulating.

And voila: it is done! Finally, you can see how well everything fits into the new cabinetry; her four-foot Mizuya pantry is especially spacious. Kim even made a short video tour of the finished product, which really shows how well these cabinets define the tone of the room, but don't overpower the rest of the house at all.

Again, if you're at all interested in a really good deal on step tansu - my single favorite piece of cabinetry - note that Greentea is running their Step Into Summer promotion, with large discounts on all step tansu, for another two weeks (it ends on June 15!).