With most folks Usenet access now coming through Google Groups, I guess it's easier to refer to these things as the latter than the former. Either way, check out alt.home.repair - it's a tremendously busy group, with thousands of visitors asking questions - and getting good advice - on everything from the best way to prime flashing and gutters to discussion of direct-vent gas appliances, drain installation, pointing mortar and plenty more. In addition to our own forums (above), this is a great place to get advice and share your knowledge on almost any old-house related topic.

Selling reclaimed materials (mostly wood, from slabs to milled boards and all sorts of bits and pieces of trim) and billing themselves as a "salvage boutique," Heritage Salvage certainly knows how to market themselves to Marin County. In addition to the expected salvaged materials and fixtures, they carry a pretty wide range of furniture built from salvaged materials, from modern pieces to those more specifically Mission.

Japanese Gardens in the US

The United States includes a number of first-rate public and private Japanese gardens, some being the cause and others the result of the immense importance that Japanese formalism has had upon American landscape and architectural design, most visibly in the Arts & Crafts Movement and more recently in certain contemporary styles.

One recent addition is the University of Illinois at Springfield's new garden; other highlights throughout this country include the very small but well-designed Japanese garden in Ashland, Oregon's Lithia Park and another, larger in scale, in Portland; San Francisco's Japanese Tea Garden and Anderson Japanese Gardens in Rockford IL.

Spokane, Wasington's Nishinomiya Garden is particularly photogenic. Saratoga, California is home to Hakone Gardens, the oldest Japanese estate in the Western Hemisphere - the bamboo forests at this eighteen-acre preserve are as impressive as they are enormous. The University of Arkansas' sprawling Garvan Woodland Gardens includes the Japanese-inspired Garden of the Pine Wind. San Diego's Japanese Friendship Garden's tea house is in operation most weekends, and the koi in their pond are some of the oldest in North America. The Asticou Azalea Garden, on the property of the Asticou Inn in Northeast Harbor, Maine, is particularly attractive when its New England backdrop is in the throes of Autumn's blazing reds and golds. The Morikami Museum and Japanese Gardens in Delray Beach, Florida, includes not only a very pleasant garden but a museum of Japanese, Japanese-American and other related artwork, both classical and contemporary. Van Nuys, California is home to Suiho En, a Japanese water and fragrance garden, noted as one of the most authentic in the US. Also in the greater Los Angeles area, San Marino's Huntington Gardens includes a large pleasant Japanese garden as a small part of its acreage.

Canada also includes three of the most impressive Japanese gardens in North America: the Nikka Yuko Japanese Garden, the Nitobe Memorial Garden on the University of British Columbia campus, and the Japanese garden at Butchart Gardens in Vancouver.

A very interesting article in today's New York Times explores the apparently shadowy world of antique dealers and restorers. Apparently this reputation-destroying article is the result of a bit of a war of attrition among big-name antiques business insiders:

Michael Smith, a prominent decorator in Los Angeles, was staggered when a friend called from London in early April with the news: John Hobbs, a London antiques dealer known for superb English and Continental furniture, stratospheric prices and wealthy American clients, had been accused by his longtime restorer of selling fakes.

Mr. Smith said he was panicked at the thought that two very expensive mahogany chests of drawers he acquired for a California financier in September — described on the invoice as a fine pair of English commodes, circa 1830 — might not be worth anything close to what he had paid.

His fears might have been justified. Detailed workshop records and photographs provided by Dennis Buggins, Mr. Hobbs’s restorer for 21 years, indicate that Mr. Smith’s commodes were designed and fabricated between 2004 and 2006, using materials plundered from several old wardrobes and a linen press. The cost, Mr. Buggins said, was about $55,000. The asking price was 365,000 pounds ($736,000 at the time), a retail markup of more than 1,000 percent, although Mr. Smith managed to pay $450,000.

Elaine Ellis' firm, Arts & Crafts Tours, produces specialy-crafted tours - led by world-renowned experts in the field - of private homes, gardens, exhibitions, collections and sites important to the Arts & Crafts Movement. Currently in development are a few tours of the United States, specifically to Cranbrook and in the New York City region, to visit work by the architecture Bertram Goodhue.

Arts & Crafts Tours offers highly individualized tours to sites and countries where the best of this work still exists and where new work is being created. We look at the past to help us understand the present - and we would like to have you join us. Take a short virtual tour through our site and then we hope you’ll take a real tour.

While most of our programs are offered through museums, art, craft and architectural organizations and institutions, we are always happy to prepare an itinerary for individual travelers and we are happy to work with small groups (6 - 12 people) to plan and arrange tours specifically designed to satisfy specific interests.

apologies for light posts this week

Sorry for the light posts this week. Had a small heart attack and am back from the hospital with stents in and lots of new medications. As a result I may not get back to the usual Hewn & Hammered schedule for another week. Sorry.

Longtime reader David Ford of Ford Craftsman Studios reminds us of the upcoming third annual Chicago Arts & Crafts Show, this coming weekend - May 17 and 18. Dozens of dealers will be present at the show, which is held at Concordia University in River Forest. Two workshops - one on stenciling and the other entitled "Light and Color: The Essentials of the Craftsman Home" will be offered for a small fee; admission to the show itself is $7.

Husband and wife Blaine and Laura Avery are ceramic artists in Seagrove, North Carolina, just 45 minutes south of Greensboro. Strongly influenced by the Arts & Crafts Movement and the organic forms of Art Nouveau, their urns, plates and teapots are reminiscent of the shapes of Grueby and Roseville. Both potters frequently rely on both natural clay tones and the blues and greens so popular in A & C; the colors are especially vivid in their tile work.

Their shop is open Tuesday through Saturday, 10 am to 5 pm, and they have regular kiln openings each spring and fall. 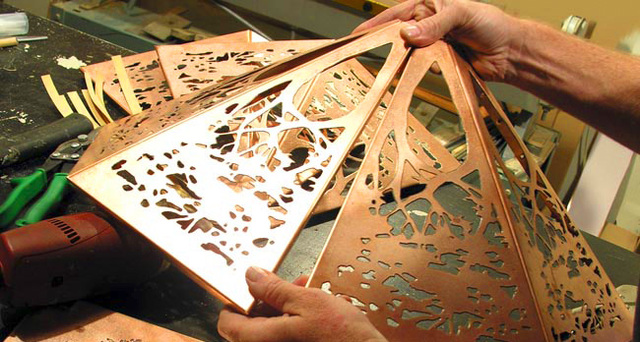 James Mattson fell in love with the idea of making his own light fixtures when he saw a picture of a 1910 Limbert copper, mica and oak lamp. After building a similar lamp for himself, he learned the fundamentals of etching copper from an ancient Popular Mechanics article, and kept at it until his hand was sure. Today, he makes absolutely beautiful chandeliers, table and floor lamps, lanterns and sconces, switchplates, and other bits and pieces (and a few larger-scale commissions) all of it in stunning etched copper, hand-made art glass, mica and oak, and all of it of his own design.