Cooperstown's Fenimore Art Museum will open their long-planned Gustav Stickley: The Enlightened Home exihibit tomorrow, April 1 2008. The large exhibit - including more than 40 Stickley-made items - will run through August 10. The items, which include furniture and a wide range of decorative items, were drawn from numerous sources including the Stickley Museum in Fayetteville NY, Dalton's in Syracuse, the Stickley Museum at Craftsman Farms in New Jersey and several private collections.

Could you all do me a small favor and, in the comments below, list the shops you know of anywhere - in the US, Canada, the UK & elsewhere - that specialize in Arts & Crafts related items? I'm thinking of not only places like Ohmega in Berkeley, which sells both new and old shades, lighting, fixtures and hardware, but small furniture stores, art galleries that specialize in A&C tile and plein air painting, neighborhood antique dealers who have a good selection of A&C ceramics or wooden items. Bonus points if they are on the web.

update: reader Boe Miller offers us a list compiled over the past six months.

Even though I'm not interested in living in a modern house, I've always been interested in the new materials that contemporary designers use - many of which are much more environmentally sound than the materials of two decades ago - and I find that there's a lot the old-house scene can learn from the various technological tricks developed by today's architects and designers.

Just as Maybeck constantly experimented with new materials and techniques to maintain heat in the winter and cool in the summer, I think there's plenty of room for old-house remodelers and DIY-types to expand our knowledge from the experiments going on in the various alternative-shelter movements.

There are a jillion blogs devoted to experimental architecture and repurposing of various engineering techniques and materials. Here are a few from my irregular reading list; maybe they will be interesting and/or useful to you:

Rick Tauzer was Sacramento's best-kept secret for many years - a talented cabinetmaker and finish carpenter who built some of the prettiest custom furniture in town, and did gorgeous interior architecture for many years. He's retired to Oregon, but his pieces continue to grace some very pretty homes throughout our region.

Diane Ayers in Sacramento's Curtis Park neighborhood is selling her Tauzer piece, a very attractive tall and deep armoir modeled after a contemporary Stickley design. She won't ship it, but if you live near Sacramento and are looking for something like this, you certainly won't find a better deal; in my opinion, $2000 is a steal for such a nice-looking piece of furniture.

If you're interested, email Diane. If you'd like to see additional photos, she has some up here.

A bit of digging around over at Flickr found three large groups (agglomerations of photos from dozens of different users) devoted to remodels. Many of the remodels documented are in and of historic homes, and some are better than others.

here are a few favorites (links are at the bottom): 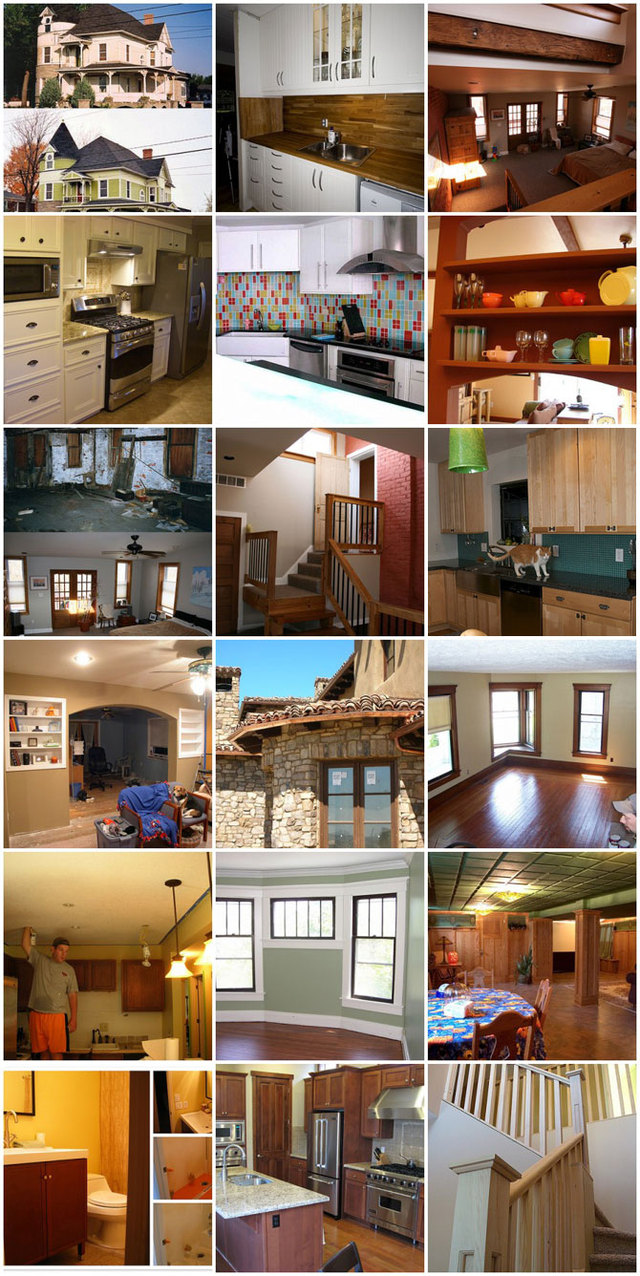 Arts & Crafts Revival according to the Seattle Times

It's always interesting when a newspaper suddenly and inexplicably picks up that we're in the middle of a revival of the A&C Movement, especially when this has been going on since the late 1980s. Usually, though, it's a case of warming up a particular audience for an upcoming home show or museum exhibition. Not so with this article by the Associated Press' Ula Ilnytzy: it's a general primer on the Movement, its various offshoots and collector subcultures. It would have been nice to see a bit more specialization - there's nothing here you don't already know - but it's certainly not a bad thing to be seeing articles like this in regional newspapers. And the photographs are certainly nice.

"Have nothing in your houses that you do not know to be useful or believe to be beautiful."

Those words of William Morris — British poet, socialist and wallpaper and fabric designer — are as inspiring now as they were when he helped the Arts and Crafts Movement span the globe at the turn of the 20th century.

With its focus on clean lines, hand crafting and natural materials, the style was a response to the excesses of the Victorian era and the advent of industrialization and its emphasis on quantity over quality. The same ideas feel fresh in the current era of mass production, fueling a renewed surge of interest.

In fact, the revival inspired by a 1972 Princeton University exhibition has already surpassed the original life span of the style's popularity in the early 1900s.

This Sunday, March 15 2008, SOHO (Save Our Heritage Organization) will lead an historic home tour through five spectacular houses in the Mission Hills area. Two Craftsmans, two Spanish Colonial Revivals, and a Pueblo Revival home will be featured, with more than enough time for architecture buffs to pore over the myriad architectural details in each.

Additional related events on Saturday and Sunday morning include guided tours of Fort Rosecrans, classic tile of the region, 30 classic apartment bungalow courts and a special gift shop aimed at "armchair architectural critics" and others outside the Whaley House in Old Town.

According to the Union-Tribune, some of the details in the featured homes are really exemplary, such as the hand-tooled copper fireplace hood at the 1912 McMurtrie / Witherow House on Ampudia Street.

This annual event is a major fundraiser for San Diego's premiere historic preservation organization, and the price is well worth it; the tours are extensive and led by local experts, and I'd say it'd be worth a drive or train trip even from LA to attend at least one or two of these events.

Seattle's Tilth: a top restaurant - in a bungalow

Did I let in a draft? Should I take off my shoes?

As I stepped into Tilth, I felt as if I were dropping by somebody’s home, not entering a restaurant.

There’s no proper vestibule, no host stand. And the tables — for only 40 diners — are squished together in two downstairs rooms of a Craftsman-style bungalow with a humble fireplace in which squat, fat candles flicker.

That’s a big part of what distinguishes and recommends this sweet, sweet restaurant, but Tilth, whose name refers to tilled earth, also boasts an organic certification — from the exacting Oregon Tilth association.

That doesn’t mean that everything Tilth serves is organic, because wild fish and foraged mushrooms, for example, aren’t eligible for such designation. But the restaurant is consistently finicky about its suppliers, and that was abundantly clear in meaty, juicy, snowy slices of albacore tuna, pan-seared, oil-glossed and served with celery root in various forms: a purée, crisp wedges like French fries.

Above right photograph by Stuart Islett. Visit the Tilth Blog.

As usual, I've filtered out all the "Stickley era" labeled junk and other dishonest listings.

This very pretty and well-landscaped 2 bed / 1 ba Tudor is not far from my home in East Sacramento. Walking distance from McKinley Park and its very pretty library and community center, pond, tennis courts, sporting greens and picnic areas, the 1131 sq foot home (plus detached 1 car + workshop garage) includes a breakfast nook and formal dining, what look like original (and very well cared-for) tile counters, a pantry and some pretty built-ins, plus hardwood floors throughout. A modest and very attractive home in one of the area's nicest old neighborhoods.

We've got additional high-res images in this Flickr photo set.

Florence Dixon was a regular contributor to The Craftsman between 1901 and 1916; the following article appeared in the September 1910 issue.

The special value of the Japanese garden in this country lies in its availability for small areas. Nowadays, when a man wants a garden, he plans for some definite landscape effect. Often the size of his lot precludes the possibility of an Italian garden or a naturalistic treatment after the English-American plan. But a Japanese garden may be had in all completeness in a space where one would have said there was scarcely room for a flower bed. The Japanese garden adapts itself to lack of space. Other systems copy nature on only one set of terms, those of life-size, but the japanese method, while it can be and often is developed on a large scale, may also be reduced from natural size through all stages to a tiny miniature.

Arts & Crafts bungalows mix and match well with all sorts of landscaping - from the zen-like Asian-inspired landscapes of Greene & Greene to cactus gardens and even the manicured, symmetrical patterns of some of the English A&C-influenced landscape designers.

When it came to planting the bungalow garden, the most influential designer for Californians, as for the rest of America and England, was Englishwoman Gertrude Jekyll, whose best-selling book "Colour in the Flower Garden" reflected nearly 30 years of plant design. Astonishingly, her plant combinations are still widely used today with all styles of homes. What she excelled at was the natural-looking border built up typically with a discerning use of grays, silvers, pinks and whites accented with blues and a touch here and there of yellow or red. In her prolific career she used hundreds of different plants, commenting, "There are no bad plants, only plants badly placed."