Several recent remodel shots / sets on Flickr for those of you looking for inspiration:

Sara Wiseman has a short article in the Salem, OR Statesman Journal on Bush's Pasture Park neighborhood, a pleasant area that is packed with beautiful '20s highwater bungalows.

When Jenni Green plugged in the hair dryer in the bathroom of her bungalow, the refrigerator used to blow a circuit.

The old-fashioned, single-pane windows add substantially to the charm of her 1920s home -- and to her heating bills.

And the small, detached garage at the back of the house definitely won't fit his-and-her Hummers.

Green, a writer who lives with pianist Randy Byrnes in Salem's Bush's Pasture Park neighborhood, wouldn't have it any other way.

Even as scads of new homes rise in every direction around Salem, Green believes there's just something about older homes that can't be duplicated.

Reader Keith Harrison gives us the heads-up on a disturbing trend in Seattle - tearing-down of sturdy old bungalows to make room for new custom (and in some cases tract) homes. Read Aubrey Cohen's full article in the Seattle Post-Intelligencer.

Michael and Kimberly Kocher wanted something bigger and newer than the decades-old bungalows and Craftsman houses that dominate Seattle neighborhoods, but they didn't want the suburbs.

Fortunately for them, more and more builders are providing just the thing -- tearing down small, old houses to build modern, large ones as home buyers in Seattle and nationwide move back to the city, bringing with them suburban expectations of size and amenities.

Al Ostman, who owns Columbia Rim Building Co., is one of many builders catering to the renewed interest in city living.

"It's the commute," he said "If you're not working at Microsoft, why would you want to live in Issaquah?"

Just in Seattle's single-family zones, 492 houses were demolished to make way for a new house or some other use between 2003 and 2005. Citywide, teardowns have picked up since 1998, averaging about 500 homes demolished a year -- a 57 percent increase from the average in the preceding eight years.

Some Seattle neighborhoods, such as Capitol Hill and Queen Anne, are well-stocked with old houses that provide the space modern families want, but teardowns are more common in northern neighborhoods such as Ballard, View Ridge and Greenwood, which are growing in popularity and where older houses tend to be smaller.

"the bungalow is back" in Chico - it left?

Steve Brown has a nice article on the resurgence in popularity (as evidenced by house prices) of the classic Craftsman Bungalow in Chico CA, in their daily paper, the Chico Enterprise-Record.

The bungalow is back. Homes built in this style in California in the 1910s and 1920s are becoming as desirable to early 21st century homeowners as Victorian styles were to homeowners a generation ago.

The avenues neighborhood -- and most of early 20th century Chico -- is full of examples of craftsman bungalows. Kasey Merrill, president of the Chico Avenues Neighborhood Association, said they are "the essence of what gives Chico its character."

Three architecture aficionados talked about the value of bungalows and other older buildings Wednesday at a presentation sponsored by the association. Merrill said one of the goals of the association is to educate the public about subjects that relate to the quality of life in the neighborhood.

Lee Laney, who has had longtime interest in the arts and crafts movement that inspired the building of craftsman bungalows, general contractor Craig Almaguer and architect Paul Lieberum were the speakers.

Laney said craftsman bungalows are part of a movement with "strong philosophical and perhaps spiritual roots." The movement affected furniture, pottery, metal work and textiles as well as housing design. It stressed simplicity, harmony with nature and a hand-crafted look.

Houstonist - one of the now innumerable -ist cityblogs (SFist, Gothamist, etc.) - has a weekly feature called shelterporn where interesting for-sale homes in the area are profiled. They recently profiled a pretty and somewhat representative Houston-area Craftsman bungalow:

Outside, the house has a great wraparound porch overlooking Welch Street, a private back yard and at least one palm tree — we've always wanted a palm tree, though we hear they can be more trouble than they're worth. But this isn't about practicality, is it? Inside, the rooms are lighted by cool Craftsman windows; there are pocket doors, a corner fireplace in the living room, an open kitchen/dining room that would be ideal for entertaining, and a master bedroom with a bay window.

Our friend David Ford, of Ford Craftsman Studios (makers of some of the nicest contemporary Arts & Crafts textiles, stencils and tiles I've seen), sends the following update regarding the Chicago Arts & Crafts Show, coming up on May 11 and 12 on the Concordia University campus.

The date has been set and I think all of the contracts for dealers have been sent in for the 2nd annual Chicago Arts & Crafts show at Concordia University in Oak Park, Illinois. Last year’s show had a great turnout with a pretty good split between new craftsmen and antique dealers present. The web page was recently updated with a list of the vendors.

This past weekend I went to the Sacramento Antique Faire, under the freeway just north of Broadway. It's really grown over the years - they now take up two whole parking lots, almost completely protected from the rain, and have some really excellent dealers taking part. I saw lots and lots of Bauer and other depressionware in excellent condition and at very good prices, and one dealer - whose name I neglected to get - had a terrific selection of Roycroft copper, Grueby and Newcomb and other art pottery, and one of the prettiest pieces of A&C metal I've ever seen - a silver on green bronze Heintz inkwell.

With the exception of one angry dealer who wouldn't allow photos to be taken even though the Faire is on public property (apparently he had fallen prey in the past to some kind of Ebay scam, where people used photos of his work to advertise things they didn't even have to sell) - he made me delete the photographs - everyone I met was wonderful and wanted to talk about what they collected and sold. The fair is held the second Sunday of every month and is definitely worth a visit should you be within an hour or two of Sacramento.

our friend Mark Golding over at the Arts & Crafts Home has a wonderful page of photographs of Frank Lloyd Wright interiors - furniture, interior architecture and cabinetry, stained glass and much more. The images come from well-known and lesser-known properties; the Ennis, Dana and Stevens Houses (not to mention Taliesin!) and his Unitarian Church are represented, as well as the  Palmer House, Zimmerman House, Tonkins and May Houses, and plenty more.

Lots of stuff interesting to Arts & Crafts Movement aficionados on Craigslist right now; here are some highlights - things I've found on my own, or have been sent to me by my wife (an inveterate Craigslist trawler) and various readers, all from various cities on the west coast: 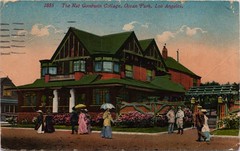 Anyone know if it still stands? I'll see if I can find the street address and get a photo of that same lot today.

Matt Wyczalkowski over on the always-helpful Rehabbers Club Yahoo group - which is devoted to sharing info among old-home rehabilitators in and around St. Louis, Missouri - sent us a short report on the ongoing and extensive electrical upgrades in his home:

I am in the process of updating the knob and tube wiring in my 1923 bungalow. Room by room, I am replacing the existing wiring with modern Romex, and adding new receptacles and lights where they are needed. When the house was built, one outlet per (large) room was considered to be perfectly adequate!

One of the challenges of adding receptacles is making accurate cutouts in plaster walls; the cutouts need to fit snugly around the old-work boxes being installed, and this can be a challenge with brittle plaster-and-lathe walls. I found that using a template for the cutout, along with different drill bits for cutting the plaster and the lathe, is an efficient and reliable way to go. It also keeps sawing, which could separate the lathe from the plaster, to a minimum. Finally, an expanding foam sealer helps to keep the box secure and cut down on drafts.

I documented a recent project - installing a sconce light on a wall - with photographs.

Thanks, Matt! I am sure your photo-documentary will be helpful for other folks going through the same process. This is an accurate and relatively easy way to make cutouts for old boxes, which are often irregular and in odd shapes.

more details on the Style 1900 party in Asheville

Jennifer Strauss posts on the Style 1900 list about a special cocktail party at the Asheville conference. Should you be at the Grove Park Inn for this wonderful annual get-together, show and conference, please do stop by to say HI to the Style 1900 folks for us:

As many of you know, Style 1900 is throwing a cocktail party during the Grove Park Inn Conference to celebrate our 20th Anniversary.  The party is on Saturday, February 17, from 8-10pm, at Elaine's Piano Bar, 6th Floor, Vanderbilt Wing, at the Grove Park Inn.

Early birds to the party will receive a special canvas tote bag, with gift items generously donated by:

Of special note is the contribution by Ephraim Faience Pottery. They are placing a custom wrapped chocolate bar in each gift bag.  Underneath one of the wrappers will be a golden ribbon. The person who gets the candy bar with the golden ribbon will win their Unity
Bridge Vase, which is part of their 10th Anniversary Collection. Kevin from Ephraim will attend the reception and present the winner with the vase, which will be on display at the party.